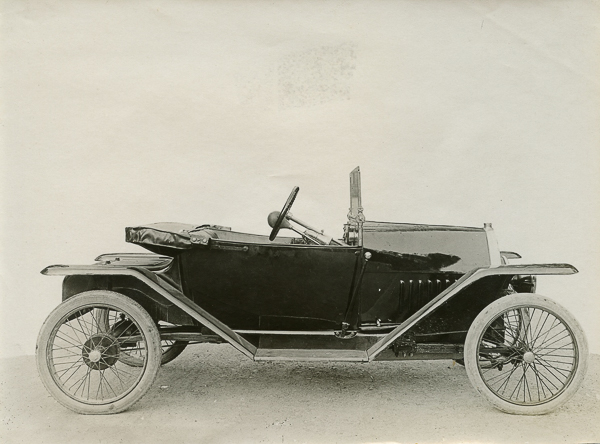 “In 1911, to a turinese, a certain Vittorio Carena, from a good local family, twenty years old, law student, not yet healed from a knee injury knocked in a hunting accident, came the fantasy of … motorizing, building, first a motorcycle with MAG engine, Torresini clutch, then small cars of the popular type, then non-existent in Italy.”

This is reported in the writings kept in the Documentation Center of the National Automobile Museum.

It is the project to create a small car with a 4-cylinder engine of 1200 cc, equipped with an epicicloidal gearbox designed by a certain Mario Riva. The assembly of the various parts took place in a small workshop, equipped for the purpose by Carena, in Corso Cairoli 10 in Turin. 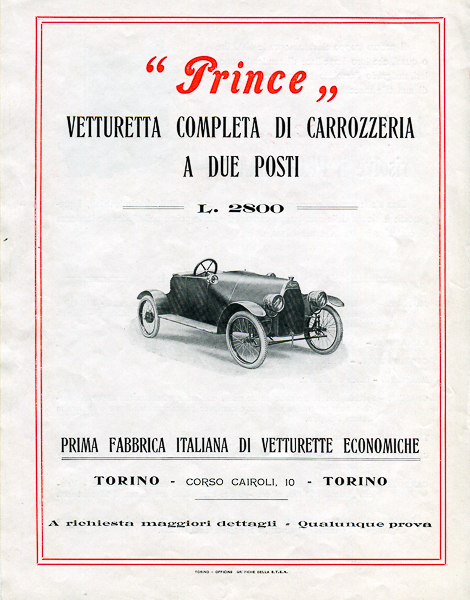 During World War I, the mechanical workshop was used to build various tools, including prince parallel clamps, supplied in quantity to the Air Force. After the war Carena expanded and perfected his original project to build light cars, also thanks to the funding he had received in the meantime. Thus was born in 1921 the Automobile Construction Company of V. Carena & Mazza and the models produced were called “Prince”; the headquarters and workshop were transferred to the largest premises in Via Pisa 15 also in Turin, near where today the IAAD (Institute of Applied Art and Design) is based. The production of the “Prince Car” officially begins, whose originality lies in the fact that it occupies an intermediate position between the actual car and the “vetturetta” car as it had been produced so far in Italy.

The Car or “Lightcar” was widespread in the 1920s in the Anglo-Saxon countries, because it responded to a real social need.

The Prince has the lines, elegance, speed, comfort, 4-cylinder engine of a typical car; But it has the lightness, the quickness, the simplicity and above all the economy of cost, consumption and maintenance of a “Vetturetta”, and that is a lot to say. 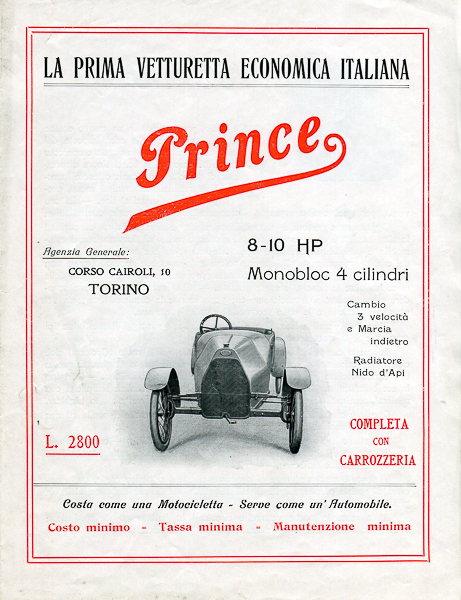 The Princes were built in two separate series: the first, the Type 19, had a 1460 cc one-piece single-block cylinder with side valves, which gave good results in testing and sales. Orders flowed numerous even from abroad and the first exports were organized.

In 1922 the second series appeared with types 20 and 22 showing an increase in the number of revolutions and engine power. The primitive price, established, as we find written, “with youthful baldness” in £. 2,800 for the first series, was raised to over £. 20,000 for the second series. The designers were different, coordinated by Carena himself and in the meantime the members increase, convinced of the next success, both from a technical and commercial point of view.

Carena’s entrepreneurial dream was not destined to last, unfortunately: the union unrest, the occupations of the factories, the passivity of the Government put a strain on the company. The Prince plant was heavily damaged, the cars under construction sabotaged, some cars were even picked up to carry bombs, the workshop manager was killed on his way home and so everything ran aground, including deliveries from various suppliers. Members frightened by these events suspended the payment of the promised dues and the banks also blocked financing; Carena, who unlike the other members, had paid all the money at his disposal, had to give up and ceased operations in 1923. 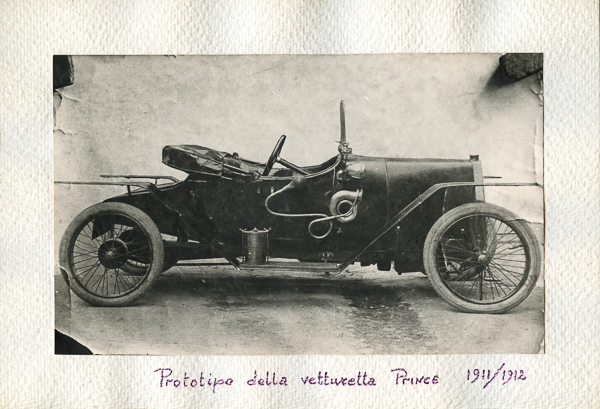 In her short life, Prince has left an important trace for the development of the idea of an economic automobile, the one that today is the utility car. Even then, the car increasingly affected daily life, so it had to assume a greater variety of attitudes depending on the conditions of those who used it and the functions it was called upon to perform. Carena thus listens to the needs of his time and tries to find a solution to it.

Prince, from the very first constructions, associated the concepts of simplicity and construction economics with those of comfort and rational mechanics proper to the car itself. 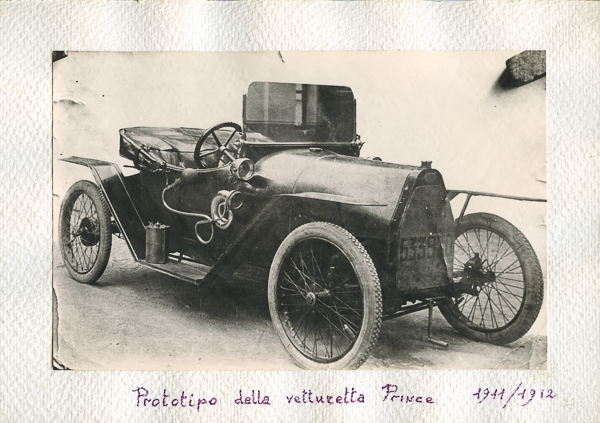 “The results obtained by this car in numerous well-known tests and the ever-increasing development of its manufacture show that it can rightly be considered among the best of its kind and it responds to the wishes of the target audience. And these praises are not exaggerated, because lately we’ve been trying the Prince, on a flat and steep climb, and we were totally amazed, not believing ourselves for the magnificent trials it had given us.” The opinions of the critics were more than flattering and the judgment on the car was very good; It filled a gap which had so far existed in Italian car production.

With regard to the tests of the small car, we must point out that Carena’s Prince in July 1921 showed up as a team at a race, the Biella-Oropa. This debut was marked by full success as the three Prince cars ended up occupying the first, second and third place. A triumph also because the three winners are “strictly” standard cars, therefore identical to those delivered to customers! This shows that in all the models produced we find the same high qualities of performance, speed and regularity. On “Motori Aero Cicli e Sport” from July 15-22, 1921 it is written that “The Prince is an admirably calculated car, with an engine… not driven to any excess of speed, but robust and profitable, which is comfortably making all its vigorous impulse on an agile  chassis (sic) that holds the road very well. And the triple success of the Biella-Oropa is an eloquent testimony to this.”

The Prince car owes its skills to the long study and the deep experience that marked its preparation, it was not an occasional improvisation made to respond only to the particular conditions of the time. At the base there is the careful design by a serious technician with bold views, who does not let himself be frightened by the arrival of the First World War but continues to elaborate his idea of a flexible and economical car that he realizes in 1921.

What is there today where the Prince plant was in via Pisa 15, from which the cars came with comfortable and elegant open or closed bodies or simply the bare chassis?

A low construction with a large courtyard, all well maintained, a large gate and next to it a plaque: “ROSMINI BAGS of Wu Xiujun – Wholesale Leather Goods”. The years have passed, the times have changed, the changes follow one another and… the ingenuity, originality and entrepreneurial perseverance of a Turinese has been replaced by the silent and tireless laboriousness of a Chinese community.