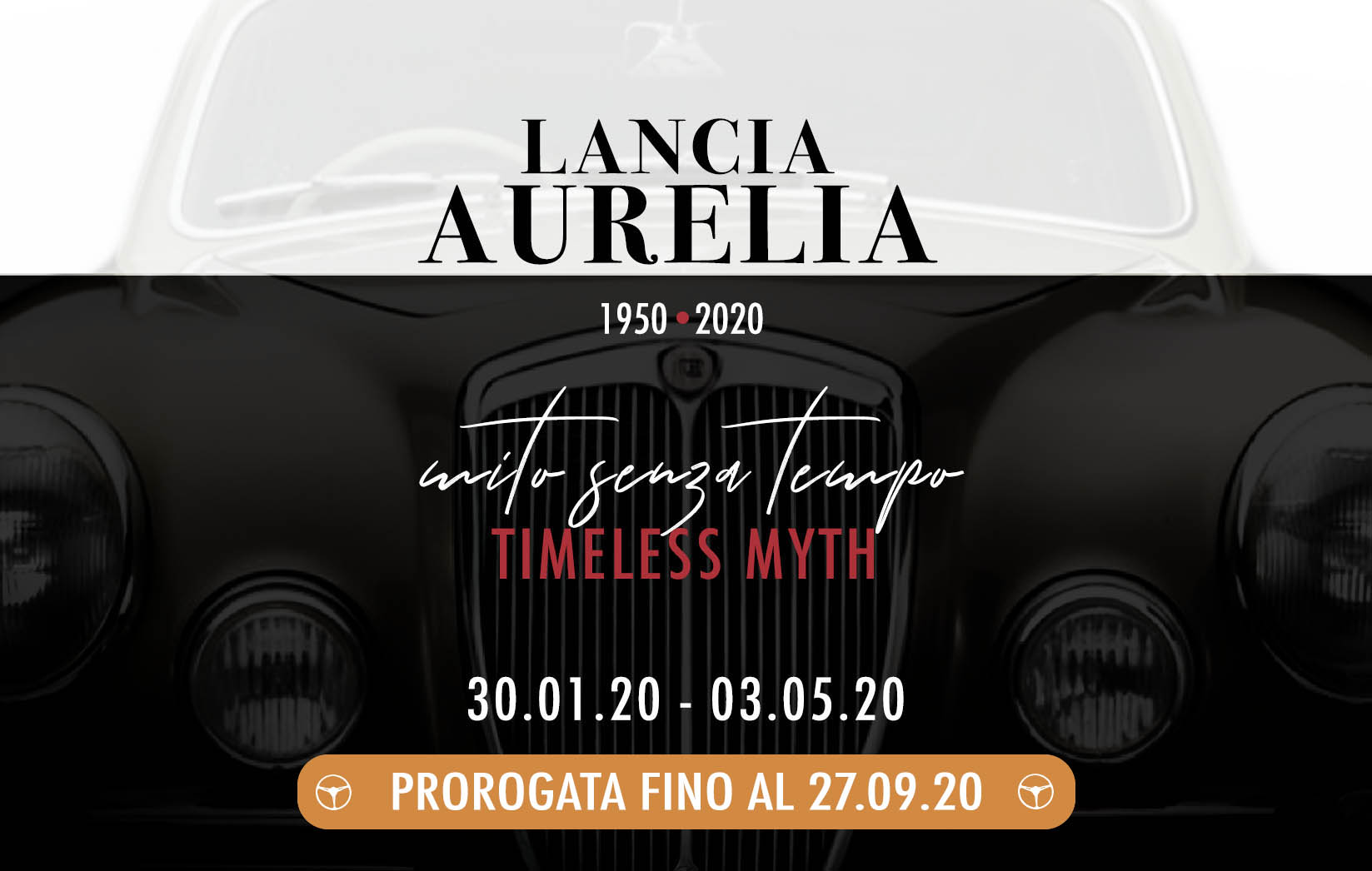 MAUTO – Museo Nazionale dell’Automobile di Torino opens the exhibition LANCIA AURELIA 1950 – 2020. TIMELESS MYTH, dedicated n to the fabulous Lancia Aurelia, one of the most advanced and refined cars of the Italian postwar production and a symbol of the extraordinary economic growth of Italy of those years: Torino an extraordinary exhibition divided into two sections that tells, through 18 exceptional standard and custom-built specimens, the evolution of this model, which was first presented in Turin in 1950.

The Lancia Aurelia became popular all over the world as an expression of pure elegance, based on an ideal of polished simplicity, right from its first appearance, thanks to the successful creative and design partnership with Battista Pinin Farina. It was so successful as to be also featured in famous movies like “Il sorpasso” starring Vittorio Gassman and “Et Dieu créa la femme” starring Brigitte Bardot, which turned it into a worldwide icon of style.

On the other hand, its technological contents, the result of technical collaborations with talented designers like Vittorio Jano and Francesco De Virgilio, imposed the Lancia brand as synonym with performance and sports cars and had legions of passionate collectors fall in love with the Aurelia. Just to name a few: the first 6V engine (which Ferrari engineers took inspiration from when designing the Dino 1500 cc); the aluminum die-cast engine block; the independent wheel rear suspension system; the rear position of the gear-change/engine to balance the car weight; the rear breaks in the same block as the engine in order to reduce the weight of suspended masses, which enhanced the grip. Lancia was also helped by the valuable collaboration of highly specialized suppliers. They included Nardi, whose two and six carburetors induction manifolds enhanced the performance of Aurelia engines, improving its power, acceleration and speed, and whose elegant steering wheels consecrated the Italian style, and Pirelli, which launched, smack on time in 1951, the Cinturato, an innovative belted radial tire, which provided the whole Aurelia range with better driving precision and grip.

A “city” car, whose sports lines accommodate the engine and mechanical features that make it a top-performing car also in races. In fact, the Aurelia was extraordinarily successful also in some of the main races of that time: Mille Miglia, Targa Florio, Giro di Sicilia, 24 Ore di Le Mans, Coppa d’Oro delle Dolomiti, and many others.

Cherished by Hemingway and Fausto Coppi, praised by Juan Manuel Fangio, who likened it to a “cup of maté” – the infusion that gives men from the Andes strength and self-confidence – the Lancia Aurelia is rightly considered “a magic moment in car evolution“(Massimo Fila Robattino, curator of the exhibition).

“Timeless myth,” says Benedetto Camerana, the Chairman of MAUTO, “celebrates the 70 years of the Lancia Aurelia, in its diverse and attractive versions: a bright symbol of the history of Italy, which summarizes the renewed trust in the future after the tragic wartime events and the industrial revival, which combined the Turinese ingenuity in mechanical engineering and design and the best suppliers, symbols of Italian quality. These are the ingredients of a car that became popular all over the world as an icon of beauty, technique, pleasure of living. The evidence of this are international awards, celebrity customers in the past and collectors today, movie productions and even comics. A product that joins Vittorio Jano and Brigitte Bardot defines ideally the universal value of the car. So, Mauto adds an important chapter to its constant work of investigation and representation of the role played by the car in the history of the 20th century.”

“Telling the story of the Lancia Aurelia”, says Massimo Fila Robattino, the curator of the exhibition “means reporting the great desire for redemption that animated Italy in the postwar hardship, which resulted in a car that would have been impossible to make just a few years earlier and that, even in those years, when the economy had still to prove that it was capable to start again, was a bold challenge.”

The exhibition starts with a 1948 Lancia Aprilia Bilux Pinin Farina, of which some aspects anticipate the stylistic features that will characterize the Aurelia to come. So, the B10, the first Lancia Aurelia, which was presented on a lawn in the 1950 edition of the Turin Car Show in obedience to the will of Adele Lancia, the chairman of the company back then, is displayed on a green panel.

There follows a range of continuously evolving models, which always amazed the public, although people were already used to the top quality offered by the Turin-based car manufacturer. The B10 is followed by the B12, whose body and mechanical parts were reviewed, resulting in a substantial increase in the horsepower compared to the previous model, and the adoption of a semi-independent wheel rear suspension system.

The sports elegance of the B24 version of the Aurelia, which allowed it to be city car and a powerful racing car at the same time, conquered also the cinema industry. Scenes taken from the movies that made the B24S Convertible and the B24S Spider famous are projected behind two specimens of these cars.

The 1957 Florida II, which belonged to Pinin Farina and was lent to Mauto by Pininfarina, close the evolution cycle of the Aurelia.

The second section of the exhibition includes unique cars. The B52 made by Bertone for the 1952 edition of the Turin car show; the B53 by Carrozzeria Balbo, the first model designed by Francesco Scaglione; the B53 “Giardinetta” by Viotti; two B50 Pinin Farina, one of which was made as a one-off version property of Princess Furtin Von Bismark. Finally, a B20 GT with the original colors used in the 1953 Mille Miglia, together with six more Gran Turismo units (from series 1 to series 6), a model that achieved great results, like ranking second in the 1951 Mille Miglia with Giovanni Bracco behind its wheel. This section also includes some of the most prestigious trophies conquered by the Lancia Aurelia, footage of the cars during races, and portraits of some “gentlemen drivers”.