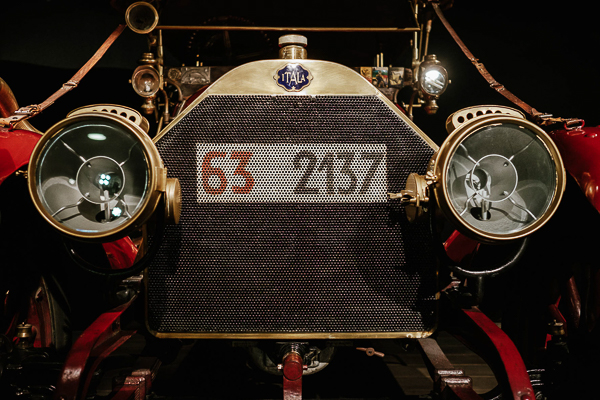 What a jumble the world of vehicle registration plates in Italy! They’ve really seen all kinds and colors over the years, ever since cars started circulating on our roads.

The plate is a “sui generis” object that has always fascinated dozens of “former children” who, thanks to these signs of recognition, have learned the names and acronyms of many Italian cities, almost like a game. However, this is a foreign body, a disturbing element of a car’s design and this is well known by the designers in the sector, yet without it the car cannot circulate.

This “automotive detail” is as well known and necessary as it is little considered but also the plaque has its own history behind it, which has changed with the passing of the years, with the changing historical situation, with the transformations of materials, with the needs of fashion and the changing habits of people. All seasoned with anecdotes, errors and confusions that are typically… Italian. 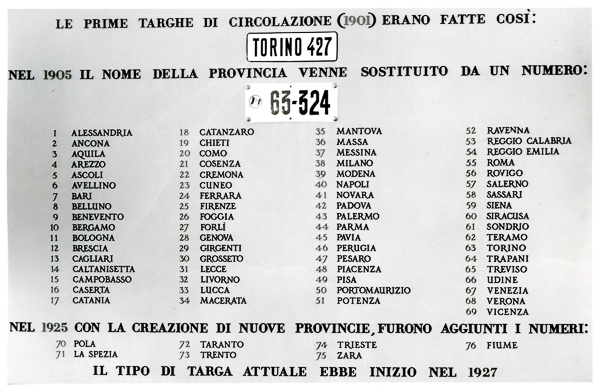 At the beginning of the 1900s, numbered plates were compulsory only for public service vehicles, but already in 1903 the “Regulation for the circulation of cars”, in Article 91, extended the obligation to all cars on the road. From that date each owner had to personally attach a fixed metal rear plate on which the name of the province and the license number were imprinted, with visible characters. This in theory, things were basically different. The numbers were rightly assigned by the Prefectures but the license plates were handmade, made in a hurry, specially for the Sunday trips and therefore one different from the other because entrusted to the momentary flair of motorists. Then the following week they were binned just to add an extra “touch of art”. At the time it was fine, there were few cars on the road and as a result the numbered plates followed a very low numbering.

In 1905 it was established that each vehicle must be registered with the Prefecture of the province of residence and that the license plate must comply with the deposited model: in white enamelled metal, with figures and numbers 8 centimeters high; the front license plate becomes mandatory.

Between 1905 and 1927 the sixty-nine Italian provinces used on the plates are recognzed from a number, assigned in a simple alphabetical order but in a short time other provinces are added to the queue without following the alphabetical order and the confusion continues! Meanwhile, cars are no longer a prerogative of only the “very” rich classes but begin to approach even those “average” rich and therefore their spread increases.

In 1927 the Prefectures ceased to deal with the issue of license plates, delegating the task to the PRA, the Public Automobile Register, managed by the Regio Automobile Club Italiano. In the same year the Government created seventeen new provinces and together with those already existing abolished numbering to arrive to the most convenient acronym.

Finally in 1931 the intricate dispute over license plates seems to make italians more aware: a fixed measure (32x22 cm) is adopted on a single line, which can adapt to any combination of numbers, it is essential that the acronym of the province is well distinguished from the numbers. The following year the back plates shrink (25x17.5 cm) and become on two lines: on the top the initials of origin and the first two digits, below, the next four numbers. In 1934 the front plates also changed in size (26.2x5.7 cm) and must be with white characters on a black background.

In 1948 the Constitution came into force in Italy and a new symbol appeared on the plates: a five-pointed star surrounded by a garland with two letters in the center: RI, is the symbol of the Italian Republic, initially large sized then reduced in 1951.

Meanwhile, from the iron plates we move to the plastic ones, starting from 1963 but the results are a little poor: the proximity of the engine and the consequent heat dissolve many.

A new type of plastic was used in 1974 and it is necessary to comply with the EEC directives which lay down other rules governing numbered plates. For the first time the plates consist of two separate two-tone parts on a black background: the first part with the orange letters for the abbreviation of the province, while the white numbers are placed in the lower area.

In 1985 the decisive change took place: the plates became self-reflecting as they were called. In fact, what seemed to us to be a great innovation in Germany, for example, has been normal since 1956! The revolution was driven by the need for greater clarity and readability. The front plate has a new format (34x11.5 cm) and the abbreviation of the province precedes the numbers. These new plates, which go back to being made of metal, are painted with a special paint that unfortunately within a few months tends to become yellow but not worries, in the late 80s, after thousands of saffron yellow plates, a regulation replaces paint.

The story continues and in the autumn of 1994 a radical restructuring of the Italian car registration system begins . Alphanumeric numbering, totally new, with black characters on a white background. The new license plate consists of two letters followed by three numbers followed by two letters. The province disappears, the license plates assume an apparent serial anonymity and the protests of the Italians spread.

For several years, being able to immediately identify the origin of another motorist, labeling him for the risky maneuver performed, represented one of the entertainments of Italians behind the wheel.

With regard to the new plates, the European Community had asked to eliminate the identification of the territory but allowed the affixing of a side bar to insert the abbreviation of the state. The decree of the President of the Republic No. 355 of 4 September 1998 establishes the introduction in the plates of the province to which they belong.

In the current numbered plates, the initials do not actually indicate the origin of the vehicle but only the place of registration. 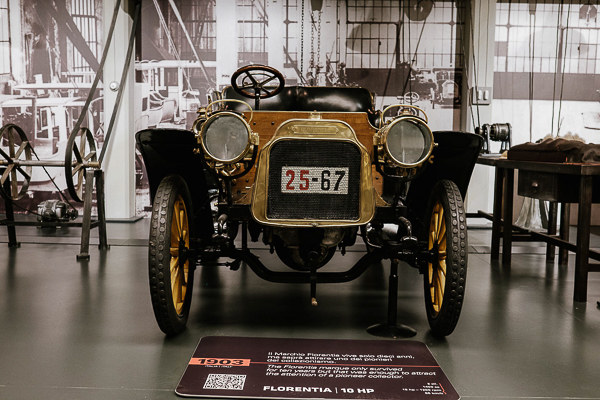 What does the license plate represent today? Beyond its mandatory nature, it has now lost its character of artistic whim for many decades and has increasingly become the discriminating element in periods of alternating license plates, imposed by local authorities to fight pollution. How many motorists would like to customize the license plate of their car according to the contingent needs, in order to be able to ALWAYS circulate? All of course, but certainly the DMV would not like these daily changes arbitrarily decided by motorists! What about the Municipal Police? In the days of traffic regulation there would be no more cars to stop or fines to do because everyone would always have the right license plate!

Of course it would be a good solution, perhaps a little bizarre and typically Italian, which would help create even more confusion. So better leave things as they are and submit to the hated alternating plates!